You are invited to Earth Day House Concert with Robin Greenstein on Saturday, April 22

Sat. April 22 at 7pm:  Temple members and friends are invited to a House Concert at Liz and Joe’s home in Wakefield.  NYC singer-song interpreter Robin Greenstein has appeared at the Linden Tree Coffeehouse and Temple Emmanuel (Jewish music) several times.  We are delighted to have her back to do an intimate show honoring Earth Day.

Robin is truly a renaissance musician, playing all kinds of music on guitar and banjo.  A rootsy musician from New York City, Robin straddles the worlds of traditional and contemporary folk/blues. Her resume includes working with folk legend Hedy West, songwriting for Bob Dylan, being a Clinician for Martin Guitars, a headliner for Renaissance Cruises, and a Club Med artist.

Her latest CD, “Tears and Laughter”, released in the fall of 2016, was her first CD of original songs in a decade.  In September, it was the #1 album on the Folk DJ charts.  They often played her song “Hole In The Ground.” which is about 9/11.

The Earth Day show will feature songs for the day as well those from her repertory of 7 CDs of traditional folk and blues songs about women, multi-cultural holiday songs, and original contemporary songs.  We request a donation of $10-$15 for the musician.

If you would like to come, please bring some “eco” finger food to share.  Beverages will be provided.  We have space for 30 so please reserve by April  16th when others could be invited : LindenTree85@comcast.net   Liz and Joe’s address will be sent to those who reserve.     THANKS.  Liz and Joe. 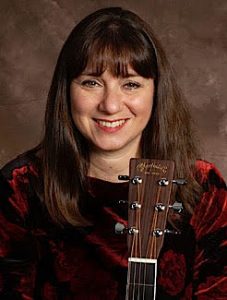