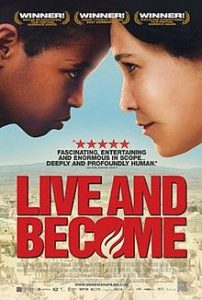 Live and Become is a 2005 French drama film about an Ethiopian Christian boy who disguises himself as an Ethiopian Jew to escape famine and emigrates to Israel. It was directed by Romanian-born Radu Mihăileanu. It won awards at the Berlin and Vancouver film festivals among others.

Schlomo, an Ethiopian boy, is placed by his Christian mother with an Ethiopian Jewish woman whose child has died. This woman, who will become his adoptive mother, is about to be airlifted from a Sudanese refugee camp to Israel during Operation Moses in 1984. His birth mother, who hopes for a better life for him, tells him “Go, live, and become,” as he leaves her to get on the bus. The film tells of his growing up in Israel and how he deals with the secrets he carries: not being Jewish and having left his birth mother.

Free – we have the menu covered – just bring yourself

RSVP to Liz by Jan. 9: lindentree85@comcast.net